I have long longed for the ability to not see foul language in my Twitter stream. Why I didn’t think to create a Kynetx app before now to do this very thing is beyond me. Today a friend of mine on Twitter mentioned that he also wished there was a way to filter or hide foul language in tweets so I decided I would build this app. I decided to build the app so that it would replace foul words with asterisks instead of just hiding the tweet from the tweet stream, which I could build another app to do or I could have a setting to change the functionality. I also don’t have a way for new words to be censored other than you contacting me and asking me to add a word to the list. I don’t really want an inbox full of foul language but if you see that my app has missed something that you think should be hidden then let me know via twitter or email and I’ll probably add it.

I’m not going to show before and after action shots but I can show you how the app behaves when I was testing it with a list of random words: 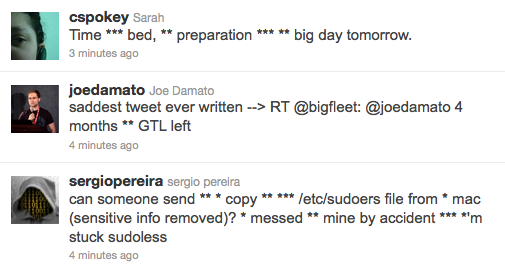 If you are interested in seeing the code that makes this app work the way it does, you can check it out over at http://kynetxappaday.wordpress.com/2011/01/21/find-and-replace-words-in-twitter-tweet-stream/